Play & I Love Neon bring you the second edition of their bi-monthly night called Danse Contact. Thanks to Christian Farley for breaking the ice during round 1 on July 21st.

This time Krista takes the decks after a 7 year absence from the Montreal dance floors and Maus continues the party from 12:30 on.

Editor’s Note: I had the privilege of winning a Krista mixtape CASSETTE back in ’99 and was driving around with it all summer until my Honda Civic was stolen…good times! I remember Thomas Krone’s The Real Jazz was on that mix.

DJ Krista began her DJ career as the rave scene began its love affair with Montreal, back in the early 90s.
She honed her skills at barely legal loft parties with the likes of Autechre and DJ Wink, in the big, sweaty Toronto warehouse parties put on by Syrous crew, and at the club formerly known as Le Lezard. She went on to hold residencies at Playground, one of the cities’ first legal afterhours clubs, as well as Jai Bar, and legendary Montreal nightclubs Sona and Stereo.
From the mid-90s to the early 00s, Krista was regularly called to play in cities across North America and even moved to that wondrous ‘City-by-the-Bay’ for a year to work for a label and play records on the beach. Krista also lived briefly in the UK, and more recently in Toronto. She has worked as a freelance writer, and label manager and rep – in addition to DJing and other things. She is, for now, back in her native Montreal, and she is looking forward to seeing you on the dancefloor.
________________________________________________________ 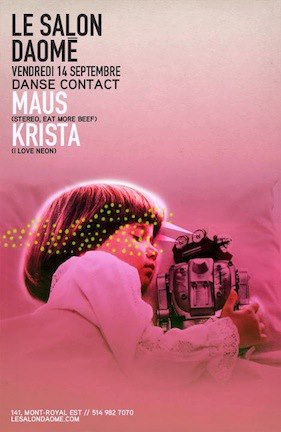